1. General tasks of the Agency?

Intelligence – Security Agency of Bosnia and Herzegovina (hereinafter: Agency) is responsible for gathering, analyzing, processing and disseminating intelligence to authorized officials and bodies in order to protect the security, including the sovereignty, territorial integrity, the constitutional order, fundamental economic stability in BiH, as well as threats upon global security which are detrimental to BiH, including:

2. Who and how supervises Agency’s work?

The Chair of the Council of Ministers of Bosnia and Herzegovina is solely responsible for the supervision and direction of the Agency’s work, which shall be undertaken in a manner consistent with the Article 10 of Law on Agency.

Parliamentary oversight over Agency’s work is conducted by Security – Intelligence Commission, jointly established by the House of Representatives and the House of Peoples of the Parliamentary Assembly of Bosnia and Herzegovina. Security – Intelligence Commission conducts overseeing the legality of the work of the Agency and other issues, pursuant to the Articles 19, 20, 21, 22 and 23 of Law on Agency.

Chief Inspector of Agency is responsible to secure the function of internal control in the Agency, pursuant to the Article 33 of Law on Agency.

3. How is information collected?

Agency is authorised to collect, analyse, process, keep, guard and disseminate intelligence to competent bodies within BiH, in a manner consistent with the Constitution of Bosnia and Herzegovina, Law on Agency and other relevant State legislations.

In the course of activities authorised by Director General of the Agency, Agency is entitled to collect information from all publicly available sources, from other bodies in Bosnia and Herzegovina and to conduct other measures, pursuant with the Articles 74 and 75 of Law on Agency.

When Director General deems necessary for the purpose of fulfilling Agency’s responsibilities under the law, Agency can apply measures of secret information gathering, pursuant with the Article 76.

Agency is also authorised for secret information gathering by previously obtained Court’s authorisation, pursuant with the Articles 77, 78 and 79 of Law on Agency.

4. How do you obtain permit for communication interception?

If Director General has justly assessed that surveillance under this section is required to enable Agency to investigate a threat to the security of Bosnia and Herzegovina then Director General will make a written request to the judge to acquire such an approval.

All such applications must contain information as stated in the Article 77, paragraph 3, and among others information to justify that the surveillance is justly required to enable the Agency to investigate a threat to the security of Bosnia and Herzegovina.

5. Possibility of employment in the Agency?

Certain positions in the Agency may be filled through a public administrative competition. Such positions shall be filled pursuant to the procedure set forth with the Articles 38 and 39 Law on Agency. Vacancy announcements for positions in the Agency, with the description of the vacant position and the general requirements for such positions, shall be published in both the “Official Gazette of Bosnia and Herzegovina” and in at least one BiH-based daily newspaper, distributed in entire Bosnia and Herzegovina.

BiH Council of Ministers establishes applicant selection committee, consisting of Intelligence Advisory Service and members of Ministry of Security, which will conduct screening of applications and interview potential candidates for appointment in the Agency. After conducted interview, Committee for vetting delivers to the Director General and Deputy Director General list of candidates for further evaluation, which is delivered at the same time to Security – Intelligence Commission. The candidate ranked as first and recommended by the majority of the members of the selection committee shall be appointed by the Director General. In case that this appointment cannot be made due to justified reasons with supporting evidence, the next candidates on the short-list shall be successively considered.

6. Who can become Agency’s employee?

Person seeking employment with the Agency must fulfill following requirements:

a) Be citizens of Bosnia and Herzegovina;
b) Be over 18 years old;
c) Hold appropriate educational and professional qualification, as determined by the Book of Rules on Internal Organization;
d) Satisfy medical examinations required for their positions;
e) Not have been dismissed from the civil service as a consequence of a disciplinary measure at any level of governance in Bosnia and Herzegovina three years prior to the date of application for the position within the Agency;
f) Possess a certificate stating that the individual has not be subject to a criminal conviction and that criminal proceedings have not be instituted against him/her;
g) And not be affected by Article IX.1 of the Constitution of Bosnia and Herzegovina.

Position of the Agency in BiH 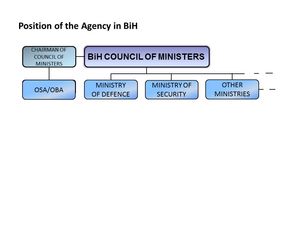 Internal organization of the Agency 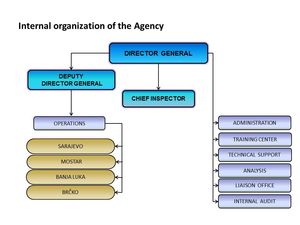